ISIS is reproducing hundreds of thousands of al-Zarqawi

Exclusive – Raqqa is being slaughtered silently 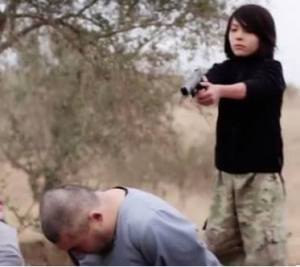 ISIS, since the control of the city of Raqqa and the rest of the cities and towns under its control, sought to attract people to its ranks through persuasion and intimidation, it knows that the pledge from old men has not the same importance of the allegiance from children, whose will grow up with the extreme thought of the organization, and perhaps there will be a new thought more extreme than the organization itself.

ISIS, after the control of Raqqa in 2014, sought to restrict the educational process by interfering in the work of schools and teachers, and started to establish private schools for males and another for females “including cadres and students”, but the main goal for the organization was the setting for its own educational office, where the organization arrested a number of the female students in the secondary schools in the city during the second half of the school year ( 2013/2014 ), and they whipped many teachers for several reasons, some of them concerning to the materials taught by teachers for students, and the others relating with the prohibitions orders which prevent smoking, and so on.

In the end of the school year, while the certification exams [secondary – preparative] was approaching, the organization prevented students from leaving the city to enter examinations outside the borders of the province, knowing that ISIS has already prevent doing these exams in the province, as the organization arrested the returning students from other provinces after finish their exams, and later they prevented them from trade-off or going to universities by tearing compulsory service notebooks, to prevent the departure of the lands of the caliphate completely.

During summer of 2014, ISIS stepped its missionary activity through tents and vehicles subordinate to the missionary Office in the neighborhoods, and that roam the province to the north, south, east and west, it was aimed at children which the street has become the only place for them, and tried through these activities to attract the largest possible number of children to the camps which interested with recruiting children by age group, the organization divides the children into 3 categories:

Category starting from  8 to 12 years.

Category starting from 13 to 14 years.

Category starting from 15 to 16 years.

Children are prepared in these camps to be cadres of ISIS, so the organization are using these children in receivership, periodicals and even in military and suicide operations, for example, one of the two suicide attackers on the area of Ein Issa, was a child who was 13 years only, while another suicide, who carried out the bombing of the military airport of Tabqa, was a child nearly twelve years.

In while, Armed opposition which seized the city of Raqqa in March 2013, exerted a large efforts to pursue teaching students, through education offices in the local councils, which restored the bulk of the schools in the city, as well as other educational offices, such as the department of education and the department of exams that follow the offices of the opposition, it was able to manage examinations of 2012/2013 in an acceptable way to some extent according to the available possibilities, and opened most schools and achieved the proportion of commitment exceeded 95% of the students at the beginning of the school year in 2013 .

ISIS launched a declaration in late summer about its intention to print its own new approaches, and appealed the experienced teachers and specialists in prepare curricula to review the Office of Education, so this office devoted all possibilities of the organization like printing presses and material capabilities for the preparation and printing of the curriculum.

In the beginning of the 2014/2015 school year, the organization kept stalling about the opening of schools and confiscated all previous curriculum and burned it, and opened the schools for elementary school students and left a teacher’s freedom to give students the basics of literacy and numeracy, but quickly ISIS issued a decision announcing the non-completion of the curricula, and closing schools because the teachers didn’t commit the religious courses , ISIS statement explained that the previous educational institutions and teachers are from infidels, and prevented teaching the old curriculum, which has considered calling for a secular and disbelief, and that statement prevented students from leaving the lands of caliphate to continue their education in the lands of infidels , and they abolished private institutes which has previously licensed, and they stressed the penalties for those who violate this statement, and put conditions for teachers that they should repent and disowned of disbelief, and they must subject to special sessions in order to prepare them from the religious side to be ready for teaching in the schools of the caliphate.

ISIS sought to set up its own schools according to their ideas and their methods, where they taught and graduated students according to its educational vision, in this context, the educational office has issued the decision in which established the central institute for caliphate cubs, which focused on the education of children of religious science and prepare them physically and train them on martial arts, until they be able to receive the banner of jihad, according to the statement of the organization which seal with the words ” a book guides , and a sword supports ” .

Through last few days, ISIS has finished of preparing set of schools and began the educational process on its own way, by following these steps:

– Preparation of the new teaching plan, which does not contain subjects such as (Music, Sports, Drawing) or any similar activities.

– Cancel subjects such as (Chemistry – Philosophy – National Education – Islamic Education) and add new books like the books of monotheism.

– full amendment to other subjects like (Arabic language and history) .

ISIS previously announced a contest to recruit teachers, where the applicant number to the contest exceeded 150 teachers, 60 of them were accepted after checking their ideology, so they accepted whose have ideology and intellect consistent with the thought of the organization, and sent them to undergo an intense religious course for nearly a week in order to be ready to work in the private educational structure of the organization.

Now the children of Raqqa are in the schools of ISIS, and these schools will be the camps which the organization always sought to attract children to it, and it will set up children whose carrying the thought of the organization and will fight in its sake, these schools under the auspices of the Caliph and his educational office from the ground up, where the values will instill and grow in a fertile environment for this thought, the child is the most vulnerable and the most affected and easier to attractive, the organization realize that only one-month period is sufficient to accomplish the indoctrination and programming process for children, making it difficult to remove the radical ideas from the mind of the child completely, so the child will be ready to kill his parents if that was necessary, and orders came to do so.

Hamoud Almousa
media activist from the city of Raqqa, student at the Faculty of Law at the University of the Euphrates. Director of the Media Office of Raqqa, founding member of "Raqqa is Being Slaughtered Silently", founding member of the documentary project of "Sound and Picture". I work in documenting violations committed by Assad's regime and ISIS group and extremist organizations inside the city of Raqqa, as I work in programming, design and visual media. I hold a certificate of coach in digital security, and a certificate of journalist coach, and a certificate in documenting violations against human rights, and a certificate in electronic advocacy. I underwent a training under the supervision of "Cyber-Arabs" in collaboration with the Institute for War and Peace "IWPR", about the management of electronic websites and leadership of advocacy campaigns, and a training of press photography under the supervision of the photojournalist "Peter Hove Olesen".
Website
Previous Post

Immigrant fighters of ISIS are abandoning the organization